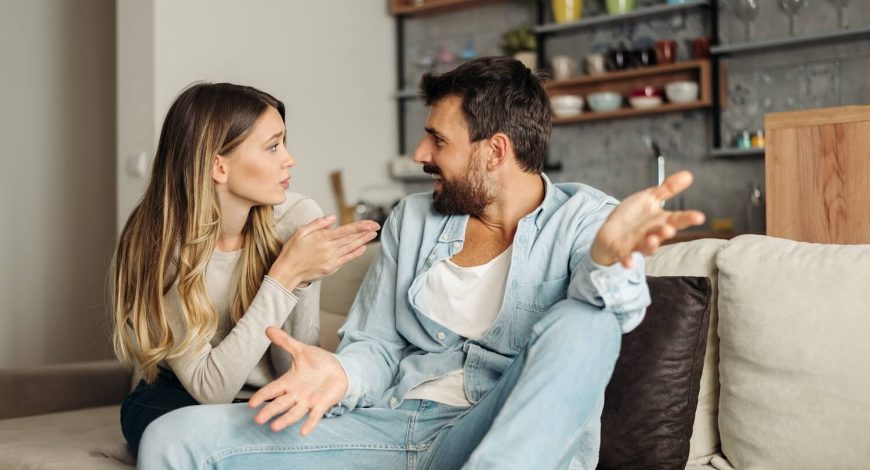 There are three off-limits phrases that I’ve vowed to never use in my own romantic life based on my experience as a couples therapist. I promise you that these three phrases I’m about to share are never helpful. What’s more, they can lead to a full relationship breakdown if using them becomes a habit. Take a look at my own personal three forbidden phrases in relationships.

One of the biggest relationship crimes is to accuse your partner of acting just like their mother or father. Comparing a partner to one of their parents can be extremely triggering. Saying that a partner is acting like their parent in moments when you’re finding their behavior to be intolerable is a deep insult. In fact, I’m willing to bet that the people who do sling this comment at their partners know just how insulting it’s going to be when it lands.

In addition to insulting your partner’s family, you’re also potentially digging up deep wounds from your partner’s childhood that are now becoming intertwined in the argument you’re having in the present moment.

It’s also important to choose your battles. If the behavior is simply an “annoying” trait that they’ve taken from their parents instead of something harmful and destructive, it might be best to just live with it.

Has anybody in the history of the world ever actually calmed down after being told to calm down? I would probably say that the answer is a firm “no” based on my experience as a therapist. In fact, research makes it clear that shifting from an anxious state to a low-arousal state is a difficult, slow process that requires far more than an unhelpful incantation.

I know that telling someone to calm down may simply be an automatic response that you say out of an instinct to diffuse a tense situation. However, these two words have the potential to blow up a situation like few things can. Being told to “calm down” can feel like being told to suppress what you’re feeling instead of voicing your thoughts. It is extremely invalidating. A better option is asking what is making them upset, explaining that you want to understand what is upsetting them, and letting them know that you are there to simply hold them if that’s what they need.

This last phrase I would never say to a partner isn’t necessarily a phrase. It’s more of a sentiment. I would describe this category of off-limits phrasing to be anything that could feel like bullying to your partner. You might be using sarcasm, insults, or assumptions that assign negative motives to your partner’s actions. Remember that the undertone of your words sets the tone for the relationship!

Yes, I still recommend against using argumentative, accusatory, or contemptuous wording even if it’s a situation where you’ve been cheated on either through physical or emotional cheating until you have all the facts on the table.

If you feel words that sting coming to the surface, it might be time to take a breather from the conversation until you can get your point across without unnecessary cruelty that will lead to hurt feelings.